Yup, it’s that time of the year again, the festive season! Christmas trees, lights, decoration, … and the Advent of Code! If you’re not familiar with the Advent of Code, well, it’s a puzzle game for programmers during the advent.

Each day, you get a new challenge, written as part of a bigger story. The goal of these challenges it to find the result by using your programming skills.

Today’s challenge was one of those good old, “how efficient is your code” challenges. The challenge input consists out of two parts. First, we have a list of elements (eg. “ABCD”). The second part is a list of insertion rules. For example, one of the insertion rules could be “AB -> C”. In that case, we have to insert a C between each occurrence of “AB”. In our example, that would become “ACBCD”.

Now that we explained the rules, it’s time for the first part of the challenge. For each combination of elements, there will be an insertion rule. That means that if we apply all the rules, the length of the list of elements nearly doubles.

Part one of the question is to repeat this process ten times, and to find out which element occurs most and least often.

The first class I wrote is a class to represent each pair of elements as a separate object. This means that “ABCD” would become AB, BC and CD.

To do this, I created the following clas:

To store this information, I created the following class:

This class represents the whole set of rules, translated to a key/value store (a Map).

I also wrote a method to create this object from the input. Since the input is AB -> C, I created the following pairs:

In addition to the fromLines() method I also created a calculateNewPairs() method which translates the pair into the new result. If the pair could not be found within the list, the original pair is returned (that’s what the getOrDefault() method does).

The next part is to implement the polymer structure (the list of element pairs) itself. Naive me started by storing each individual pair within a list (List<PolymerPair>).

However, as I mentioned before, after each iteration, the result will nearly double in size. Since the COVID-19 pandemic, we all know what this means… there’s some exponential growth here!

Luckily, the amount of possible element pairs is limited. So, in stead of storing each individual pair, I decided to keep track of how many times a specific pair appears in the list. In our original example that would be:

To solve this, we could create an additional pair called (D, nothing). In that case, we have the following counts:

To implement this, I created a new class called PolymerPairCount:

In addition to the @Value annotation, I’m also using the @With annotation. This Lombok annotation provides a method for each field to create a new instance, changing only the given field.

This makes it easier to apply the insertion rules, because now we could do something like this:

In this example, ab would be our original pair, while ac and cb would be the replacement pairs. By using withPair() we can replace the entire count of AB to the same count, but for AC and CB.

So, to implement this, I created a new class called PolymerTemplate that has a list of PolymerPairCount objects:

Since Java makes it easier to group by and count/sum to a Map, I also created a constructor that translates a Map<PolymerPair, Long> to a list of PolymerPairCount:

The next step was to create a static method fromLine that translates the original string (ABCD) to a list of pair counts:

This is the first example where the new constructor comes in handy. In this example we’re create a PolymerPair for each pair and count how often each pair occurs. This is done by pairing the groupingBy() collector with the counting() collector, as seen in the code above.

To make sure that we also create a pair for the final element (as mentioned before), I’m checking whether the current character is the last one, and if so, I set the rightElement of the PolymerPair to null.

The next part is to create a method that accepts a PolymerPairInsertionRules parameter and returns a new PolymerTemplate (because I like immutability). To do this, I wrote the following method:

In this method, I’ll use the calculateNewPairs() method to translate each pair to the replacement pairs, and use the withPair() method to keep the original count for these new pairs.

For example, if we only had a rule called “AB -> C”, the result would become:

However, since multiple insertion rules could create the same pair, we also need to do the same grouping by and counting logic again. In stead of using groupingBy() with counting(), I’ll use groupingBy() with summingLong() to determine the sum of the original counts.

The final method is to create a calculateElementCounts() method that returns the amount of times each element occurs in the result. As mentioned before, we can do this by counting the sum of the counts of each left element within a pair.

As usual, I implement the challenge itself by using a unit test.

In this case, I started by reading the file and converting it into a PolymerTemplate and PolymerPairInsertionRules object:

After that,I need to apply these rules ten times and use the result of one operation as the input of the next one. The operator that we need to use for this is the reduce() operator. For example:

After that, we can call callElementCounts to know how often each element appears:

We could create a separate stream and use max() and min(). However, streams like a LongStream also come with a collector called summaryStatistics(), which calculates both the minimum and maximum at once:

And there you have it, part one complete!

Part two confirms our suspicions that the exponentional growth matters. Why? Well, part two is essentially the same as part one, but now we need to apply the rules 40 times in stead of 10 times. Luckily we didn’t go with our naive solution, since that would cost us about a million million iterations before we know the result.

In stead of that, we can add some new parameters to our parameterized test: 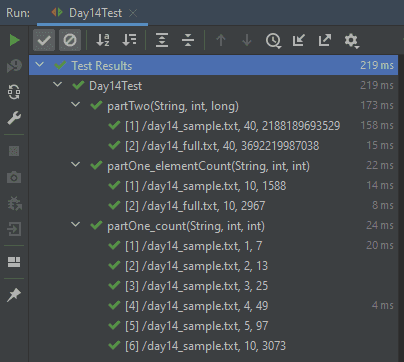 I’m starting to see a pattern here. Challenges with exponentional growth, like today and day 6 often have the same challenge for parts one and two. The main difference is that the number of iterations changes drastically, so that you need to come up with a smart solution to avoid running into these exponentional growth issues.

As usual, the full code can be found on GitHub.